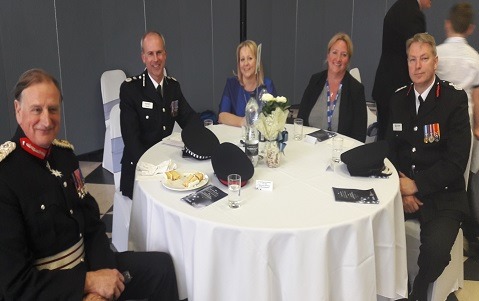 The awards were presented by Lt Col Patrick Holcroft LVO OBE, His Majesty’s Lord-Lieutenant of Worcestershire, and recipients were personally congratulated by Chief Constable Anthony Bangham.

Deputy PCC Tracey Onslow was in attendance at the awards, last night.

For officers to receive this accolade it requires the Chief Constable to make a recommendation to the Home Secretary certifying that an officer has served twenty years and their character and conduct has been honourable throughout. Three police staff were presented with a framed certificate of service as an expression of appreciation from the Chief Constable for the completion of twenty years unbroken police service and
one Special Constable received a long service medals for his nine years’ of service.

Police and Crime Commissioner John Campion said “It is important for hard working and long serving officers and staff to get the recognition they deserve, and I’d like to congratulate all those who received an award. These dedicated individuals have continued to make a difference to communities, and have all made a valuable contribution to keeping people safe.”

Chief Constable Anthony Bangham said: “I am very proud of all officers and staff that have received their medals and certificates this evening. Each recipient helps to keep our communities safe and protect people from harm.

He continued: “Their medals and certificates recognise the many years of exemplary service in the various complex and demanding areas of policing and I would like to congratulate everyone and thank them for their dedication.”