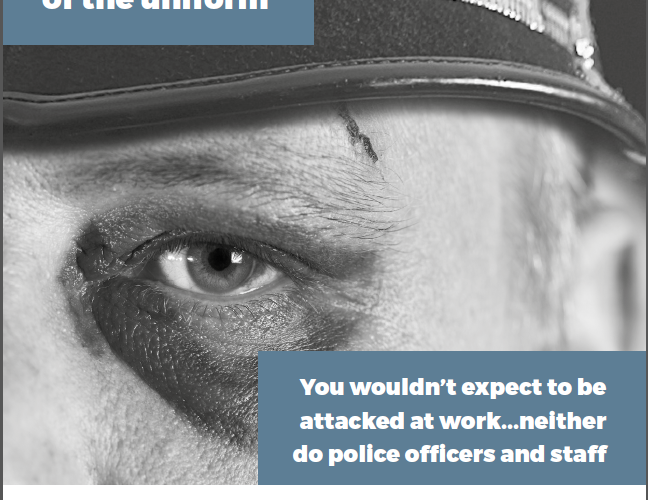 Police and Crime Commissioner John Campion is starting a new campaign, aimed at reducing violence against police and improving how the issue is tackled nationally.

In West Mercia, more than 850 attacks against police were reported in just 18 months.

The Commissioner is leading a campaign to prevent these incidents taking place. Campaign materials will be shared across multimedia platforms, police custody suites and city and town centres to try and change the way a minority of people act towards officers. The PCC also wants to ensure officers continue to get the same access to services as any other victim of crime and will call for national improvements in how attacks against the police are collated.

The campaign which is being supported by West Mercia Police, the Police Federation and Unison, encourages people to think about the challenging and sometimes dangerous roles police professionals face. It also focuses on the ordinary person who occupies every police uniform, asking people to look #BehindTheBadge at the impact that violence against officers can have on that officer, their families and their friends.

John Campion said “Our police are professional, dedicated and work hard every day to protect us and keep us safe. As communities, we need to recognise that and do everything we can to protect them as well.”

“The vast majority of our communities are very supportive of the difficult work our officers do, but it’s clear that we can do more to reduce the violence that officers face on a regular basis – in every force, in every region, every day. There’s clearly a small number of people who need to realise that attacking a police officer is not, and will not, be tolerated. It can also have long-lasting consequences – both for them and the officer in question.”

“I am confident that West Mercia Police is committed to keeping officers and staff safe. I have seen for myself the regular training officers get and the support mechanisms that are already in place for our workforce. Additional help and advice is available through the Police Federation and Victims Support. These internal processes are unquestionably strong. What I would like to see is fewer of these incidents happening in the first place”

Visit the Behind the Badge campaign page for more information.