Cadets use PCC funding to help people in need

Cadet groups across West Mercia have each received a £1000 in grant funding from the West Mercia Police and Crime Commissioner to fund good causes and help the less fortunate in communities.

In North Worcestershire, the cadets have adopted The Basement Project as their charity of the year, and invited a guest speaker to talk to them about homelessness among young people. The cadets also arranged, made packed lunches and accompanied 40 of the charity’s service users on a trip to the West Midlands Safari Park. They also used some of the funding for a paediatric first aid course for young, often single parents who would not normally be able to access such a course. 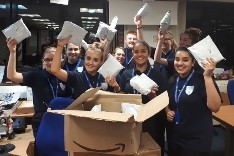 In Telford, the cadets used the funding to ‘Bridge the Gap’ between the young and the old, creating goody bags they could hand out at Wrekin Retirement Living.

Commissioner John Campion said “These young people have made a real difference in our communities, and have set a great example to others. I am proud of them, for their caring approach and using their own initiative to improve the lives of other young people in need. This is just one example of how the cadets have made significant contributions to building safer, more secure communities and on behalf of the public, I’d like to thank them for all their efforts”

PC Neil Sharpe of the North Worcestershire, Youth Engagement and Cadet Team said “There are so many positives to be taken from our cohort working with the Basement Project. It was also very regarding to seeing so many happy faces on the children and parents that it as they engaged with the cadets. Many young people do not leave the towns that they live in each year, and for those that have young children the idea of these days out is for those children to be able to say that they have been somewhere special. It is fantastic to see our cadets wanting to help other young people in our local community. I am extremely proud of them.”