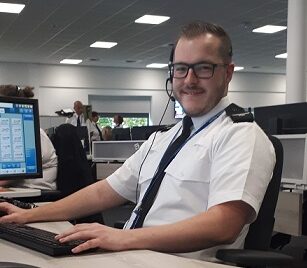 West Mercia Police is supporting International Control Room Week which celebrates the achievements and dedication of the remarkable people who respond to emergency service phone calls.

The awareness week, which runs from Monday 21 October to Sunday 27 October, 2019 highlights the vital role that control operators do.

Call takers and dispatchers, who are based within our Operational Control Centre (OCC), are the first point of contact for many people who are often in distress and are contacting the police for help. They have to quickly take control of the situation, gather the information needed and provide reassurance and advice to the caller.

OCC staff deal with traumatic situations – from dealing with risk to life, reports of violent of crime, road traffic collisions as well as people who are in crisis.

No two days are the same, with call handlers and dispatchers providing a service to the public 24 hours a day, 365 days a year.

“Working in a police control room is challenging but can also be incredibly rewarding. On average they take around 400 999 calls and 1300 non-emergency calls each day. Our staff know that they are making a difference to people’s lives every day. They are often our unsung heroes who aren’t visible in our communities but are providing a fantastic service.”

International Control Room Week was launched last year and was supported by almost 200 control room operations and more than 10,000 personnel from police, ambulance, fire and coastguard services across the UK, as well as control rooms from as far afield as USA, Australia and India. The campaign this year will use the hashtag #unsungheroes.

PCC John Campion said:  “The men and women of our control room are the front door to our police force and are hugely important in the system of policing that keeps us safe.  They are the unsung heroes who do vital, challenging work in support of officers on the ground to ensure the public get the response they deserve in an emergency.  My behind the badge campaign aims to highlight the challenges our police officers and staff face on a daily basis, make clear that abuse of any kind will not be tolerated and ultimately ensure they remain safe and supported every day.”