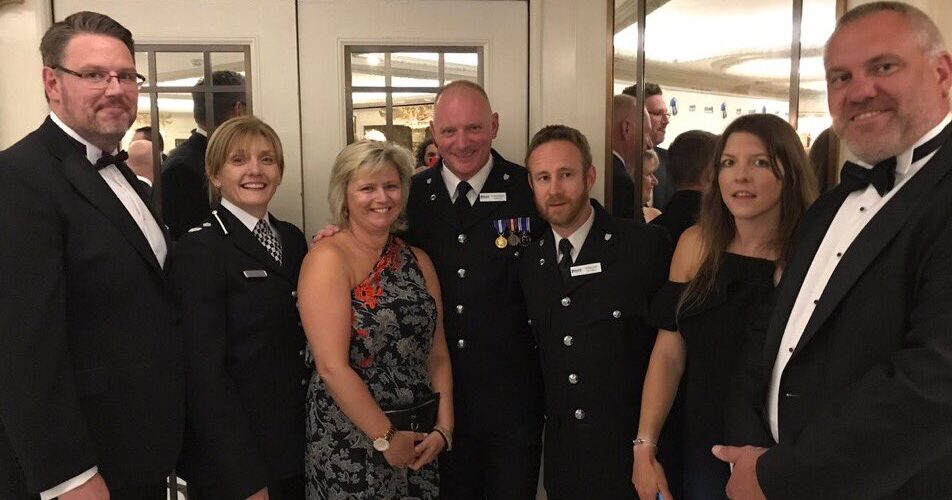 PCC John Campion has commended the bravery of two West Mercia Police officers, who put themselves in danger to save a woman’s life.

PC’s Phil Parke and Steve Bloomer from Telford, attended an incident where a man had doused himself and a woman in petrol and was threatening to set them both on fire. The officers remained, despite the obvious danger and were able to pull the woman to safety and gain control of the man. The officers were treated in hospital for chemical burns and cuts from glass on the floor.

The man was later convicted of attempted murder and sentenced to life in prison. The courageous officers were commended at last night’s Police Bravery Awards, held in London.

Commissioner John Campion said “These officers went above and beyond to save the lives of all four people in the room. On behalf of the victims, and our wider communities, we are extremely grateful for the actions of PCs Parke and Bloomer, and of the many every day heroes in West Mercia.

We must remember these are ordinary people with lives and families outside of work, who do extraordinary things to keep others safe. I am very pleased to see them getting the recognition they deserve.”

PC’s Phil Parke and Steve Bloomer said “What we expected to be a routine domestic incident, turned out to be very different and escalated quickly. Instead of our usual approach to these things, we were forced to take immediate action in order to deal with the situation.

We feel proud to receive this nomination and we are confident that any of our colleagues would have acted in a similar manner to deal with the incident.”

Chair of the West Mercia Police Federation, Sergeant Russ Yeomans, said: “These officers showed supreme courage in tackling this man, knowing full well that petrol could have ignited at any moment. The victim said later that there is no doubt in her mind that she would have been killed had they not arrived when they did.”

Amanda Blakeman, Deputy Chief Constable of West Mercia Police, said: “I am incredibly proud of PC Bloomer and PC Parke, as well as each and every one of our officers at West Mercia Police. This is just one fine example of the effort and bravery that our men and women put into serving and ensuring the safety of our local communities. PC Bloomer and PC Parke went out of their way to ensure the safety of another individual, which is exactly what we, as a force and an alliance, are about. The two officers truly deserve this recognition.”