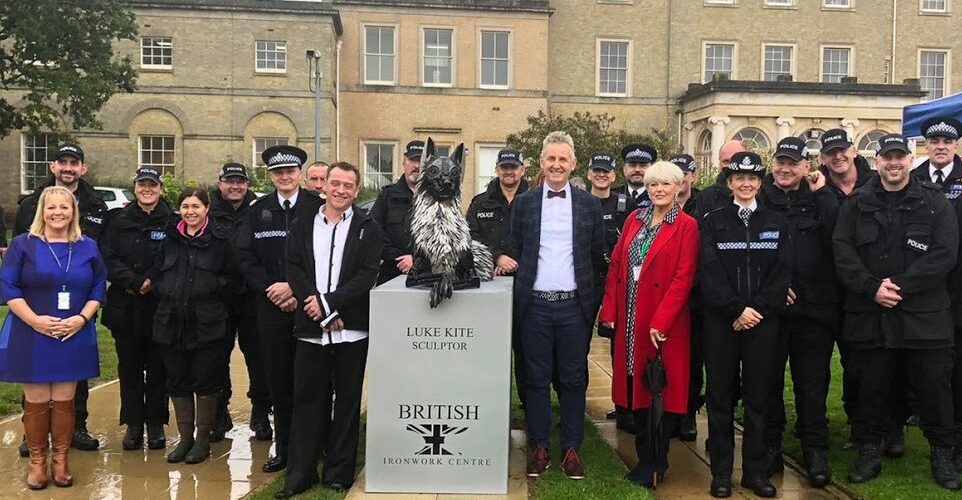 A statue which celebrates the hard work and dedication of police dogs has been unveiled outside West Mercia Police Headquarters.

Police and Crime Commissioner John Campion and Assistant Chief Constable Martin Evans officially unveiled the special statue, created by Ironworks sculptor Luke Kite, which honours and celebrates police dogs in West Mercia and beyond. The statue is created from apprehended knives and decommissioned guns as well as objects that relate to the lives of these incredible creatures, such as dog bowls and whistles.

Dog handlers and their four legged colleagues, including retired PD Bacca and hander PC Mike Davey, also attended the unveiling. PD Bacca received a bravery award, after attempting to stop a man with a knife in Hereford. PD Bacca was slashed a number of times during the incident, but despite his injuries, he returned to the scene to protect PC Davey.

Commissioner John Campion said “Police dogs are a hugely important part of their police service. I have been a vocal supporter of Finn’s Law, supporting greater legal protection to dogs who bravely run towards danger on a daily basis. I would like to extend my thanks to the Ironworks for this incredible reminder of the hard work, dedication and bravery of the dogs.”

Chief Constable Anthony Bangham said “It is an honour to be able to recognise the hard work and dedication of the police dogs and their trainers and officers that deal with them on a daily basis.

“Incorporating the items from amnesties makes the tribute even more appropriate to the force and what it represents.”

Clive Knowles, Chairman of The British Ironwork Centre “We felt that this project was a natural fit for us to support West Mercia Police and to use some of the knives left over from building the Knife Angel. We are always keen to support West Mercia Police, as they were the first constabulary that helped us with our National Anti Violence Campaign.”