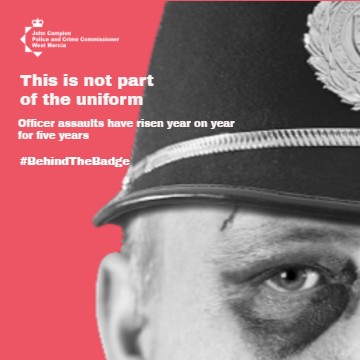 Increase in officer assaults in Herefordshire during Covid-19 lockdown period

Assaults on West Mercia Police officers rose by 43% in Herefordshire during the lockdown period, despite an overall reduction in total recorded crime.

As part of PCC John Campion’s commitment to raising awareness of officer assaults, his Behind the Badge campaign highlights the worrying number of those affected, and influences the national agenda.

Figures show that from April to June 2020 officers were assaulted on 30 occasions in Herefordshire compared with 21 between January and March 2020.

Officer assaults have been steadily increasing over the last five years and figures show that in 2018/19 there were 538 assaults across West Mercia on frontline officers, with the figure for 2019/20 rising to 659. In the first three months of this year, one in fifteen police officers were assaulted.

PCC John Campion said: “These statistics, once again, make very worrying reading. At a time when overall crime has reduced, unfortunately officer assaults in Herefordshire have not followed suit.”

“I have been committed to raising awareness of assaults on frontline workers, and making sure that the right support is in place for officers that have been victims of crime. The statistics have reinforced my support for tougher sentencing for the minority that assault frontline workers, and to send a clear message that this behaviour won’t be tolerated.”

”Assaults have far reaching effects on officers, their families, friends and colleagues which cannot be under-estimated. I will do everything I can to support action to bring the perpetrators of this type of crime to justice.”

Sarah Cooper, West Mercia Police Federation Chair added, “It can never be accepted that any assault on an officer bravely serving the public is ‘just part of the job’. It is only right that individuals who carry out these abhorrent crimes are brought to justice.”

“Unfortunately, all too often, the feedback I am getting is that charging decisions and sentences at court are woefully lenient. In my view a strong message needs to be sent out through the criminal justice system that offences against our officers will not be tolerated. Currently, officers are often left feeling unsupported and let down by a system that does not treat these cases seriously enough. An offence against any emergency worker is an offence against society and cannot be condoned. The increase in the number of assaults on officers is incredibly concerning and I am keen to work alongside the PCC and the Force in addressing this issue.”

Assistant Chief Constable Rachel Jones said: “Every day our officers put themselves in harm’s way to protect others and keep our communities safe so assaults on them and all emergency workers are appalling, not only during the response to Covid-19 but at any time.

“I have no doubt that the vast majority of people in our communities will be as equally horrified by this increase as we are and agree that anyone that intentionally harms a public service work should be brought to justice.

“The wellbeing of all those that work for and volunteer for us is paramount. We take our responsibility to look after them incredibly seriously and we have commissioned a review of our officer safety training and PPE provision to explore if there are new options available to us to try and reduce assaults either through additional training or different equipment. We will continue to work with Mr Campion and the Police Federation to ensure that appropriate support services are in place for them and their families.”