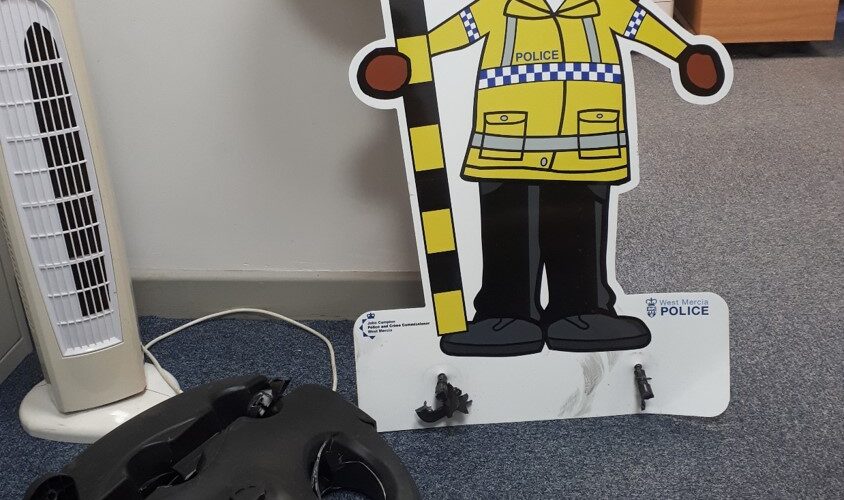 Police and Crime Commissioner John Campion has raised concerns after a ‘mini officer’ sign was damaged as a result of it being hit by a car.

The PCC first introduced the metre-high metal ‘caricature police officers’ in November 2018 as part of a road safety campaign. There are now 70 of these signs, in place across West Mercia, that are designed to stand outside schools warning passing drivers to slow down and not park on the zig-zag markings.

PCC John Campion said: “This accident should be a stark warning to motorists, because it could have easily been a child. These signs are portrayed in a characterful and childlike way to encourage drivers to be considerate before they speed or park inconsiderately outside a school.

“When these signs are loaned to schools, they are advised by their local policing teams to position them in a safe place, such as a pavement, so I am extremely concerned that someone has managed to collide with this sign.

“I urge people to take their time around schools. These signs are working really well for the majority of schools that have used them, but there are some areas that are clearly still suffering. We all, as police, local authorities, parents and teachers, need to be doing more to see this problem lessen. If schools would benefit from extra signage, I am more than happy to accept applications through my safer roads funding.”

Details about the PCC’s current grant schemes can be found here: www.westmercia-pcc.gov.uk/about-your-pcc/pcc-grants-scheme/

Issued on: Monday 20th May