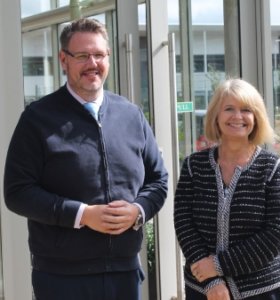 The MP has invited traders to a summit held at Malvern Hills Science Park next Friday, where John Campion and the local policing team will be able to answer questions.

The event follows a pledge from the Police and Crime Commissioner during one of his visits to the area, with Harriett, following a serious ram raid cashpoint theft at the local Post Office.

West Mercia Police has recruited an extra 215 front line police this year and the latest Spending Round confirmed the cash to recruit a further 20,000 officers nationally.

John Campion said: “It’s important for traders to be safe and feel safe, and I fully understand the impact these crimes can have. Not only am I making policing more visible, but I have invested in specialist rural and business officers who can help traders improve the protection of their own businesses. I welcome this opportunity to engage with traders, listening to and acting upon any concerns.”

Harriett met with staff at the Barnards Green Co-Op last month to hear about their experiences of low-level crime and anti-social behaviour, and this week the retail group launched a national campaign to highlight the issues faced by their staff on a regular basis.

Harriett commented: “I met with staff from the Co-Op and they outlined some of the local challenges they have with shoplifting and anti-social behaviour and how they deal with offenders.

“Bearing in mind John Campion visited the area with me a couple of years ago to talk about how we can better protect local traders, I thought this would be a great opportunity for local business owners to raise their issues in person with him and his team.

“I have had some interest from traders in the wider Malvern area who would like to come, so I have agreed to broaden the event, and I hope that local traders who want to come and quiz their Police and Crime Commissioner and representatives of the local policing team, will get in touch and register their interest.”

Local traders can find out more about the event by emailing [email protected].