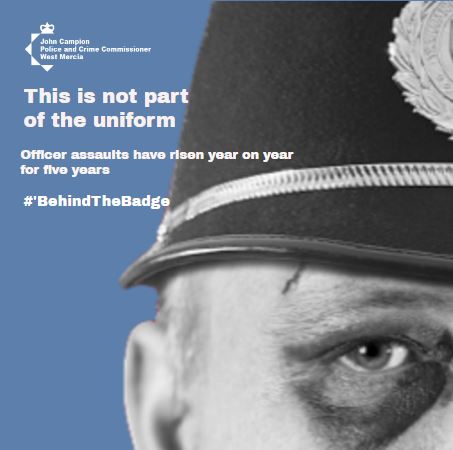 The Assaults on Emergency Workers (Offences) Act which came into force in 2018 gave the courts the power to hand down sentences of up to twelve months. The new proposals go further and would change the maximum sentence from twelve months to 2 years.

PCC John Campion has long campaigned to reduce assaults through his Behind the Badge campaign which aims to raise awareness of officer assaults, and influence the national agenda on the issue.

PCC John Campion said: “I was a firm advocate of the Assaults on Emergency Workers Act in 2018, and I have campaigned extensively to reduce assaults on police officers and other emergency workers.”

“I welcome the move from Government to take this further and send a clear message to the small minority that this destructive behaviour will not be tolerated.

“Violence against police, or anyone within the emergency services is never acceptable. We need to recognise the long lasting impact that assaults can have, not only on the victim, but their families, friends and society as a whole.”

“I will continue to highlight and challenge assaults on officers as part of my commitment to deliver a safer and more secure West Mercia. We must do all we can to protect those who protect us.”