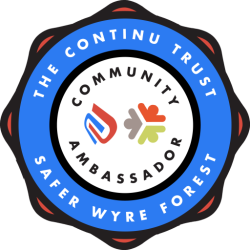 The Police and Crime Commissioner saw the inspiring work by young people across Wyre Forest and Hagley schools at the Young Citizenship Celebration Evening, held at Kidderminster Town Hall this week.

This fifth annual event, which celebrates the wide range of citizenship work carried out by young people from Wyre Forest and Hagley schools, was again organised by Safer Wyre Forest and The ContinU Trust.

As well as recognising the range of citizenship work undertaken by students during the 2016-17 academic year it also shines a light on the many positive activities done outside school, in conjunction with local youth and emergency services.

The Challenge, held over a two-week period, involved 1000 children working their way through a series of mock scenarios and this year’s winning school was Cookley Sebright Primary School. The trophy was presented by Chief Inspector Damian Pettit from West Mercia Police and George Marshall, Group Commander at Hereford & Worcester Fire & Rescue Service.

There was also a presentation of another successful year’s work by the outgoing High School ‘Community Ambassadors,’ which included the viewing of their new promotional film which showcases their role.

The evening featured the formal induction of a new intake of 50 Year 10 Community Ambassadors, recruited from the eight partner high schools in the Trust to help promote key community safety, citizenship and wellbeing messages to their peers for the new year coming. Badges were presented to the new ambassadors by the PCC.

The Community Ambassador Project recently won the “Young Persons Safety Award” in the national Suzy Lamplugh National Personal Safety Awards 2017. This Award is given to a young person or group who have improved the personal safety of others by running projects around personal safety, such as bullying and staying safe. John Campion formally presented the Award to Jeannette Lane, Project Officer at Safer Wyre Forest.

West Mercia Police and Crime Commissioner John Campion said: “It was an honour to present these awards to these young people who pay such a valuable contribution to keeping our communities safe. Not only is the Wyre Forest Community Ambassadors scheme a great development opportunity for young people, but it helps to bring communities together through important reassurance messages. I am very pleased to support it via grant funding, as part of my promise to build a safer, more secure West Mercia.”

John Campion closed the evening with the ‘Be The Change’ award for older students nominated by head teachers and principals across the ContinU Trust for their exemplary contribution to the local and wider community over the past year.

Rob Chadwick of the ContinU Trust said “Each year the breadth and depth of the work our young people do in terms of positive citizenship, fundraising, supporting their peers and just generally going the extra mile inspires us. There is a huge amount going on locally and we are delighted to be able to offer a showcase for that. Our young people richly deserve this recognition.”

Kathryn Underhill, Chair of Safer Wyre Forest, said “Safer Wyre Forest, part of North Worcestershire Community Safety Partnership, was delighted to have had the opportunity to work with the ContinU Trust again to put on this worthwhile event. It is clear that there are many young people in Wyre Forest who make positive contributions to their communities and schools and it is great to be able to come together like this, recognise the good work that they do and show them how proud we are of them and what they achieve.”