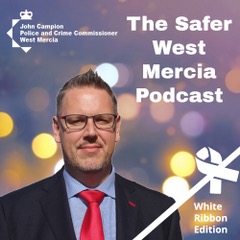 PCC shines a light on domestic abuse in podcasts

To raise greater awareness of domestic abuse and ultimately reduce the number of people that are abused, the PCC has produced a series of special edition podcasts.

Police and Crime Commissioner John Campion is supporting White Ribbon Day by inviting five special guests to join him and talk about domestic abuse, including interviews with those that have experienced first-hand the devastating impact domestic abuse can have, as well as those that are there to help and support victims.

White Ribbon Day is an opportunity for people to stand up, speak out and say no to violence against women. This year it’s more important than ever as many women have faced violence and control during the Covid pandemic.

The following episodes will be available daily from White Ribbon Day (25th November):

PCC John Campion said: “Too many people suffer violence and abuse by those they have a relationship with. I am unstintingly focused on reducing the number of people exposed to domestic abuse and believe we need to keep raising awareness and educating people about the different types of abuse people can face.

“It was an honour to speak to these individuals who gave up their time to talk about such an important subject and shine a light on it. I urge people to listen to these podcasts and share them with friends and family, as ultimately it is those people who can often step in and stop the abuse from escalating. I will continue to support victims and survivors, and seek opportunities for ways to prevent abuse from ever happening.”

The podcasts can be found on Spotify and Buzzsprout for download or to listen on Apple Podcasts.