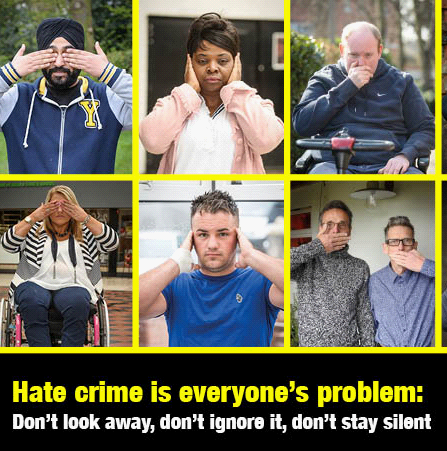 The West Mercia Police and Crime Commissioner is committed to ensuring victims of hate crime, are listened to and get the support they need, as the number of recorded hate crime offences increases.

In a report released yesterday by HMICFRS, a 57% increase was shown in offences between 2014/15 and 2016/17. In West Mercia, there was an even steeper increase, of 102% with 1321 offences compared to 654, showing a confidence in victims coming forward and an increase in crimes being recorded with a hate marker attached.

The report showed some areas for improvement nationally but evidence of concerted efforts by the police to work with local communities and organisations to promote reporting opportunities.

Police and Crime Commissioner John Campion said “Ultimately, I want our communities to be safer, happier and more united. We can all help to achieve that. I have invested in a number of projects, providing a joined up approach to addressing hate crime, and I am reassured by the work of West Mercia Police who are raising awareness and engaging with communities.

I made a commitment to victims, that they would get an efficient and effective service from the police, and the support to help them cope and recover. Great progress has been made around this, and whilst we are not complacent and there is more to build on, I am reassured that the police are working diligently to prevent and to tackle unacceptable behaviour, and injustices in society.”

Chief Superintendent Kevin Purcell, who leads West Mercia Police’s response to hate crime, said: “No-one should be targeted for being themselves and we can never underestimate the devastating effect being a victim of a hate crime can have on people. Over the past few years we have worked very hard to raise awareness of what hate crime is and encourage people to come forward and report this to police, working with our partners to make sure support is available.

“We recognise how it important it is in getting our response to hate crime right and are currently carrying out a lot of work to improve this and our contact with victims. We have already made great strides in this but are not complacent and know there is always room for improvement.

“We work very closely with our independent advisory groups made up of representatives from our local communities to ensure our response is appropriate and is considerate to the needs of victims. There is no place for hate crime in our communities and I really would urge anyone who feels they have been targeted because of who they are to come forward and report this to police.”

The Commissioner grant funds a number of project to raise awareness of hate crime including: