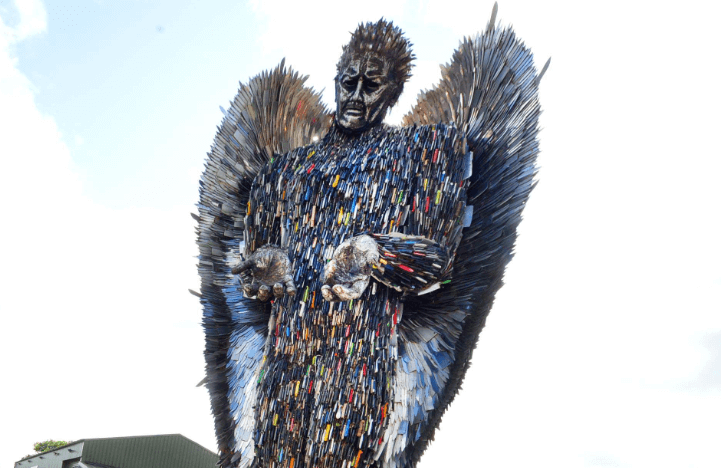 This Friday, West Mercia Deputy Police and Crime Commissioner, Tracey Onslow, and Deputy Chief Constable, Amanda Blakeman, will be visiting the Ironworks to present Clive Knowles, Chairman and Founder of The British Ironwork Centre, with a special award to recognise the help and support provided over the years. The award not only celebrates the support given to West Mercia Police, but it also recognises the impact that the Ironworks’ initiatives have had in increasing awareness surrounding knife related violence and developing safer communities across the UK.

Over the last five years, the Ironworks have supported the force through various campaigns and amnesties, including the ‘Save a Life, Surrender Your Knife’ campaign whereby knife bins were created and distributed, free of charge, across police constabularies all over the UK. Through this, the Ironworks have allowed the force to collect a large number of blades, helping to make a positive movement towards alleviating our streets from knife related crime. Furthermore, the creation of the Knife Angel sculpture, and its current movement across the UK, has initiated a great scope of debate surrounding better educating our youth and reducing knife crime across the country.

The Ironworks have recently undertaken the responsibility to create a special memorial monument to recognise our UK police dogs. The memorial will be created from apprehended knives and decommissioned guns as well as objects that relate to the lives of these incredible creatures, such as dog bowls and whistles. Once completed, the memorial is set to be positioned outside of the West Mercia Police Headquarters in Worcestershire, where it will honour and celebrate the lives of every police service dog in the UK, and beyond.

Clive Knowles said “West Mercia Police were the first in the country to step forward and aid us in the creation of the Knife Angel, now recognised as the National Monument against Violence and Aggression, and we are incredibly grateful for all of their help so far. Winning this award is not only a truly humbling achievement, but it also highlights and demonstrates how important it is, as an enterprise, to support and back our police forces. We hope that, by winning this award, we will help to continue to ignite awareness and inspire other businesses and enterprises to step forward and offer a helping hand too.”

Police and Crime Commissioner, John Campion, said “I am grateful to the Ironworks for their support in various projects, and it is right that they should be recognised. They’ve shone a light on knife crime which is thankfully still rare in West Mercia but has a devastating impact. I’d also like to thank them for their work on the memorial for police dogs, as this is a great way to recognise the animals who play such an important part in policing.”

West Mercia Police Deputy Chief Constable, Amanda Blakeman, said: “The team at The British Ironworks Centre are valued community partners who have worked with us to raise awareness of knife crime. I am in no doubt that the ‘Knife Angel’ has helped to bring this message to the forefront of people’s minds.

“I am therefore thrilled that the Ironworks are working with us on another project that will recognise and honour the bravery and loyalty of our police dogs whom we regard very much as our colleagues.

“The Ironworks’ generosity has meant we have been able to commission this work free of charge and I am grateful to them for their contribution in raising the profile of important areas in such an impactful way.”