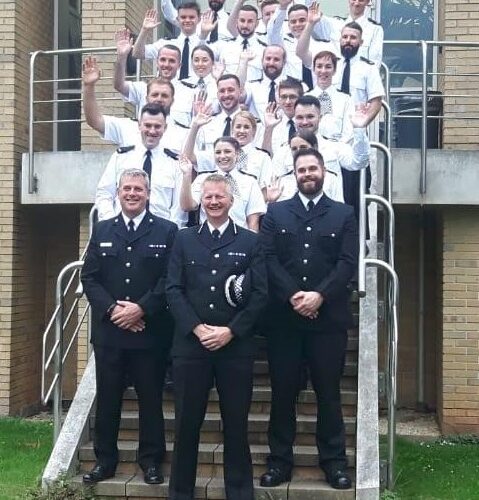 The streets of Shropshire, Telford & Wrekin, Herefordshire and Worcestershire are set to be even safer as a record number of new police officers will be joining West Mercia Police this month.

As well as 40 student police officers who will be embarking on the first days of their training with the force, six experienced officers including a police constable, two police sergeants and three detectives will be moving from other forces into West Mercia Police in July. They will be joined by 10 recruits on the Police Now programme, which sees outstanding graduates take part in a two-year national programme, working as police constables in Safer Neighbourhood Teams to help transform communities.

The officers will be assigned to roles across the policing area, with the student police officers being on patrol across the counties. The areas about to receive the new officers are Telford, Shrewsbury and Oswestry in Shropshire, Hereford, Ross-on-Wye, Leominster and Ledbury in Herefordshire, and Redditch, Worcester, Kidderminster and Evesham in Worcestershire.

Assistant Chief Constable Martin Evans said: “56 police officers joining West Mercia Police in July is believed to be a record for the highest number of recruits ever to join the force in a single month. Crucially, these officers are a great mix of experienced officers, bringing their years of policing skills and expertise, and new officers who are just beginning their policing journey with us, bringing their passion, enthusiasm and own life experiences.

“While West Mercia remains a safe place to live and work, this crop of new officers will help keep our area even safer by protecting communities and tackling crime. However, we are still recruiting for more officers to join our policing family. If you’re a passionate about making a difference and would like to work as a police constable while studying towards a paid-for degree in policing with us, I’d like to hear from you.”

Andy McManus, Team Leader, Leadership and Training Support, said: “We are delighted to welcome the latest intake of Police Now constables to West Mercia Police. We will now start training these graduates to become community leaders as local police officers, representing the diversity of the public they serve and taking responsibility for the safety of up to 20,000 people. Young people’s confidence in the police has increased by 17% in the communities where Police Now neighbourhood police officers operate. By working with Police Now, West Mercia Police is helping to break the cycle of offending.”

John Campion, West Mercia Police and Crime Commissioner said “I listened when the public said they wanted more police, visible and accessible in their communities and made the investment, bringing officer numbers to the highest level since 2012. Our communities deserve the very best from their police service, and this new cohort of officers as part of a continuing recruitment programme, will help to make our communities safer and more secure.”

To find out more about joining West Mercia Police as a police constable degree apprentice, go to www.westmercia.police.uk/policerecruitment.

Picture: Assistant Chief Constable Geoff Wessell with some of the new officer recruits at police headquarters.