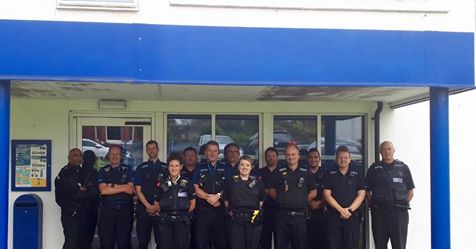 Ten extra police officers have been recruited to Oswestry Police Station, with a record number of more than 30 patrol officers now based at the station.

The increase in numbers comes as West Mercia Police takes on its biggest recruitment drive that is due to continue into next year.

Over the past few years there have been concerns from the local community about a decline in the number of officers based at the station.

Now, West Mercia Police is pleased to say even more officers will work out of the town’s station situated in Park Street.

The move has been possible thanks to the commitment from West Mercia Police and Crime Commissioner John Campion to increase officer visibility and accessibility.

With record numbers of new student officers and officers transferring to West Mercia from other police forces, over the coming months towns throughout Shropshire are set to see an increase in the number of officers based there.

Police and Crime Commissioner John Campion said “Visible policing continues to be my priority. Recruitment is at record levels, bringing officer numbers to the highest level since 2012. The new cohort of officers will make a valuable impact in communities in Oswestry and more widely across Shropshire, helping to make these communities safer and more secure.”

Shropshire local commander Superintendent Mo Lansdale said: “This is fantastic news for our local communities. We know that visibility is a huge concern for local residents, in particular people who live and work in some of our more rural areas and it’s great to be able to provide them with the increase in officers they want.

“Over the past few months we’ve seen large numbers of student officers embark on their initial training as well as many complete their training and join our patrol teams, and although it may take a little while for our local communities to see the real benefit, I’m confident that in time we will really start to see the difference and hope our local communities feel reassured about the steps we’re taking to make sure we’re doing all we can to deliver the best possible service to them.”