We’ve already got a Brenda, a Bob and a Fletch and now two more ‘mini police officers’ are looking to be named.

Children attending the Kids Fest at Quarry Park in Shrewsbury on 11 – 12th May, the Shrewsbury Food Festival on 29 – 30th June and the Shrewsbury Flower Show on 9 – 10th August can drop by the West Mercia Police stand and make their suggestions for the ‘recruits’.

These two ‘officers’ are part of the latest batch Police and Crime Commissioner John Campion has provided to help schools in Shropshire. The signs come in the form of metre-high cartoon police officers who stand outside schools warning passing drivers to slow down and not park on the zig-zag markings.

There are now over 50 of these colourful road safety initiatives across West Mercia. Currently the signs are provided to schools on a rota basis to ensure they remain impactful and don’t become a static feature.

Commissioner John Campion said: “These new recruits have been a real hit because they are helping with an ongoing problem that has been affecting both schools and police officers.

“I’m looking forward to seeing what the young members of our communities come up with so we can award these two ‘officers’ with a name badge and send them out to remind motorists to be more considerate outside schools.”

Issued on: Thursday 2nd May 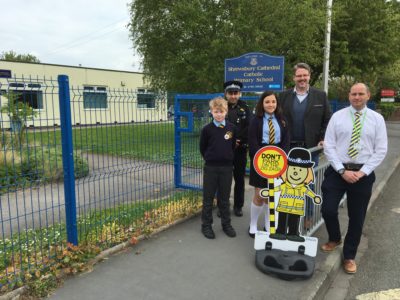