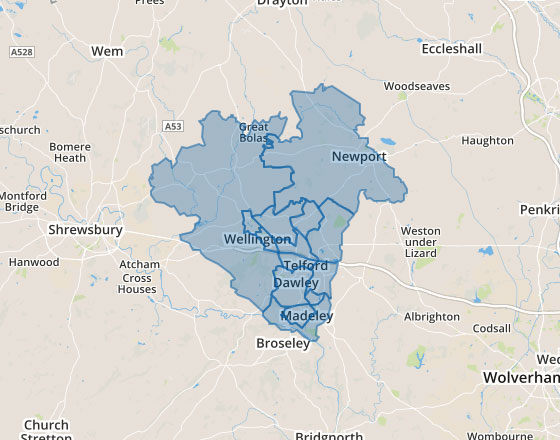 Work is under way to identify neighbourhoods of Telford & Wrekin to benefit from a £1.5 million investment to reduce crime and tackle anti-social behaviour, improving the quality of life for local people.

The joint Safer Communities Project has been unveiled by Telford & Wrekin Council and the West Mercia Police and Crime Commissioner, John Campion, and will launch in April.

It builds on the success of the £550,000 Safer Streets project launched in Brookside last November and aims to roll the programme out across a series of neighbourhoods across the borough.

Telford & Wrekin Council’s Cabinet is being asked to give the green light to the scheme, delivered in partnership with the Police and Crime Commissioner, which will first identify communities to benefit from the additional investment which will see the council contribute £1 million and a further £500,000 from PCC John Campion.

The Council and West Mercia Police will work together, combining their data, to identify these localities based on levels of unemployment, school attendance, anti-social crime and fly tipping, housing, health inequalities and every aspect of crime including knife crime.

At the same time a multi-agency project board will oversee the investment programme. Local councillors, communities and town and parish councils will also be involved in the selection process.

Once areas have been identified, individual neighbourhood action plans will be drawn up with the local community and councillors, with the multi-agency project board overseeing how the funding is distributed and spent to deliver the programme. Neighbourhood Co-ordination Officers will be appointed to work with communities and local councillors.

The project will also benefit from research carried out by the University of Wolverhampton’s Institute of Society and Community based on lessons learnt from the Brookside Safer Streets programme.

The aim is to make Telford & Wrekin a safer and cleaner place to live, work and visit.

Cllr Richard Overton, Telford & Wrekin Council cabinet member for enforcement, community safety and customer services, said: “This joint approach will focus on providing the foundation for tackling long term issues in the community, identifying the root causes of crime rather than just tackling crime itself. It will put in place longer term solutions that can be managed within the community alongside support from our teams at the Council and local partners.

“This is the very essence of partnership working, with local people and organisations coming together to make life better for everyone.”

Police and Crime Commissioner John Campion said: “As Commissioner, I made a commitment that I would build safer and more secure communities across West Mercia, and this funding will help to deliver that for the residents of Telford & Wrekin. People should feel safe where they live and not feel like they will become a victim of crime.

“I am proud to work with a range of partners, including Telford & Wrekin Borough Council and West Mercia Police, to build on progress made in tackling burglary and serious organised crime, which ultimately makes people safer.

“This additional money will not only help tackle the issue of crime itself, but also the root causes of criminality. Investment into preventative measures, such as improved home security or increased street lighting, will make a real difference to local residents by improving their quality of life and helping to generate an even greater sense of community.”