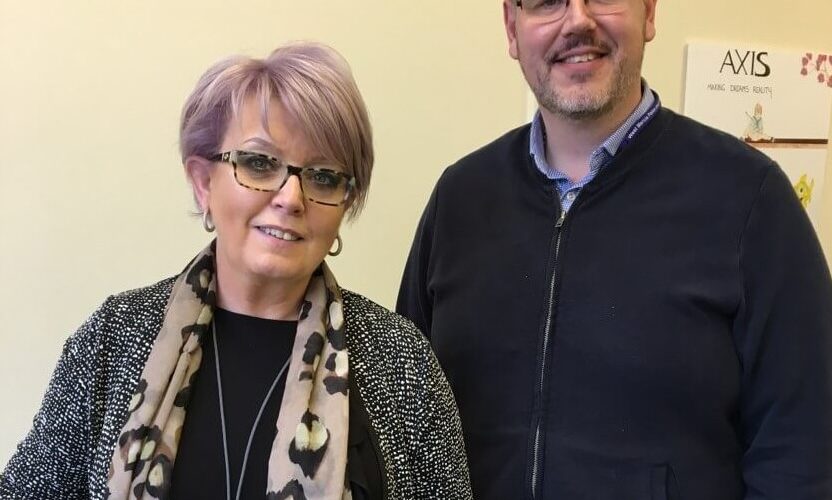 Police and Crime Commissioner John Campion and the West Mercia Police Chief Constable were pleased to welcome Baroness Newlove to the area to highlight the projects and teams that are committed to supporting young people affected by this terrible crime.

During the Baroness’s visit she saw a performance by the theatre-in-education company, Loudmouth. So far, they have engaged with over 1,000 school children aged between 13 and 14 across Telford. Today, the group performed a ‘play’ that tackles the issues of grooming and child sexual exploitation (CSE) in a powerful, yet sensitive way, for pupils at Telford Park School in Stirchley.

The Commissioner was pleased to previously provide £4,000 in grant funding for the project, which was match-funded by Telford and Wrekin Council.

The Baroness also got the opportunity to meet with Axis, the Telford-based counselling service dedicated to helping those that have suffered sexual abuse. The Commissioner currently provides funding to Axis for a support service aimed at young people aged 11 and over who have experienced recent or non-recent abuse, regardless of whether or not they’ve reported it to the police.

PCC John Campion said: “It was an absolute honour to welcome Baroness Newlove to Telford in order for her to see the work being done to tackle this horrific crime. CSE is a priority issue for West Mercia Police and myself, and I am committed to ensuring they have the resources they need to tackle the issue.

“I also want to make sure that funding is being earmarked for projects that support victims, but ultimately prevent them from becoming victims in the first place.”

Baroness Newlove said: “I admire the Police and Crime Commissioner’s decision to commission a theatre company to perform at Telford Park School to warn youngsters about the dangers of child sexual abuse and stop them from becoming vulnerable for exploitation. We must encourage all schools to explain to children the importance about healthy, safe relationships to instil respect for themselves and their future children. Only by doing that can we safeguard children from those who are seeking to groom them. It also helps them to make wise life choices.

“Too many victims suffer years of abuse before having the courage to report it. We need to make sure that we have the support in place to help those victims rebuild their lives and recover from the trauma of the crimes committed against them. Many have been let down by the institutions that were meant to protect them. We must not let them down again.

“I want to see global tech companies being more proactive in removing child abuse imagery from their platforms. Experts believe that inbuilt programmes can block images and videos. Why are these not being used more widely?  We also need to encourage tech companies to make more use of prominent deterrence messages, which target users who google words or phrases clearly linked to images of abuse.

“Too many perpetrators evade justice by using sophisticated technology. Only by bringing together law enforcement with tech firms, can we try to shield children from predators.”

Telford & Wrekin local policing commander Superintendent Tom Harding said: “It was a pleasure to meet Baroness Newlove today and talk to her about the work on-going to raise awareness about child sexual exploitation in Telford and how we can better support victims through the criminal justice system.

“Tackling CSE has been a priority for me since I took on my role and I’m grateful to our Police and Crime Commissioner for the funding he has provided to projects and services in the borough.”